The Soldier was one of the smallest combat mecha employed by the Invid and stand as imposing figures as the tower of Humanoids.

Living Invid were encased within the armor and acted as foot soldiers and also filled in non-combatant roles such as Invid Hive maintenance. In urban settings, they acted in a policing role and responsible for both control and enforcement as part of their duties. There were at least two variations of the Soldier type with the common grey or black enforcers and the more elite red Soldier. Red Soldiers acted as a form of elite guard and field commander within the armies of the Regent. All the Soldiers are stage four Invid pilots. The pilots are intelligent and capable of making independent decisions unlike the Inorganics. In addition to "enforcing" the will of the Regent, the Soldiers are also used as technicians, surgeons, directors of slave camps, and operators of the Genesis Pit.

Soldiers were typically armed with two forearm laser cannons allowing them to engage in ground combat against either enemy infantry or vehicles. Both arms contain concealed lasers, a laser cannon is mounted on the right arm, a shield on the left, and mounted on the back is a small force field generator. The concealed forearm lasers are fixed in one position. The arm must be pointed at the target to aim. The laser cannon can be removed and attached to the back, as can the energy shield. The cannon attaches to the left of the field generator, the energy shield to the right.

The Invid were capable of mustering large and seemingly endless numbers of Soldier units that were a force to be reckoned with on the battlefield. The weakest point of the armored Soldier is the sensor eye located at the front of the head. A direct hit at this point will destroy the mecha and most likely kill the pilot as well.

During the Invid war against the Tirolians, the Enforcers of the Regent participated heavily in the conquest of Tirol after the Robotech Masters departed the planet. The Regent had intended to conquer the world and find any trace of the stolen Flower of Life which Zor had used to develop not only the science of Robotechnology but Protoculture. Red Enforcers greeted the Regent when he boarded his flagship in Tirol's orbit and informed him that the Inorganics had only encountered token resistance with their being no sign of the Flower of Life. One such Enforcer was also given a voice imprint from the Regess to give to her husband where she berated him of his failure. This red Soldier guard escorted the Regent to his quarters where they inquired whether he wanted them to summon the Regess but he refused as the invasion was to commence and he desired his wife to be far away from him.

Following the conquest of the planet, the Regent was convinced to capture a number of Tirolians to interrogate as part of an inquisition which he would be conducting. Thus, a mobile strike unit of red Enforcers were dispatched from the Invid Land Carrier where they smashed the Bioroid resistance against them and secured non-combatants at Tiresia for further interrogation. After not learning anything from the inquisition, the Regent ordered his Enforcer guard to "reward" the Tiresians and a grenade was left behind which killed the captive Tirolians. Red Enforcers would face numerous skirmishes with both the Sentinels and the Humans of the Robotech Expeditionary Force who had journeyed to Tirol.

Soldiers became the primary opponent during the Third Robotech War when the Invid conquered the planet Earth after the blooming of the Flower of Life.

Robotech Art 3 refers to these as Invid Enforcers who are evolved Invid wearing body armor.

Red Enforcers of the Regent 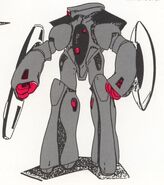