Originally, (according to the secondary canon series Legend of Zor), the Regess served as the guiding intelligence of the primitive Invid that lived on Optera. During this time, they lived a peaceful existence in complete symbiosis with the Flower of Life. At some point, the Tzuptum system was visited by Tirolians that consisted of the scientist Zor who was looking for new sources of energy for his people. Upon meeting the Invid, he became fascinated by them and their union with the Flower of Life. At night, he was telepathically called onto the surface by the Regess who believed him to be someone else who had visited her people long ago. Taking on a Humanoid form to please Zor, she entered into a telepathic communion with him where she shared her knowledge of the Flower of Life whilst she, in turn, learned of Zor's knowledge of Tirolian society.

Afterward, Zor departed the planet, though the Regess remembered him fondly. Her entire people were evolved in his image: the slug-like Invid becoming bipedal in imitation of the Tirolians. In addition, the power of the Regess was split as a second male entity emerged that resembled a larger, more evolved Invid who became known as the Regent. Their new existence continued with the Regent stating that Zor was not the person who had visited them in the distant past, though the Regess disagreed. Optera would once again be visited by Zor and a delighted Regess awaited him, but was horrified to see him arrive with an army of Zentraedi. Since their last contact, Zor had become a servant of the Robotech Masters who ordered the defoliation of Optera of all its supply of the Flower of Life. Witnessing her children harmed and the Flower of Life stolen, she and the Regent ushered their children into the Invid Hive. Angered at this betrayal, she telepathically assaulted Zor, who stopped the harvest and left only a small quantity of the Flower of Life on a ruined Optera.

This chain of events once again led to a rapid evolution within the Invid. They transformed from a peaceful species into a war-like one that sought vengeance for those that had wronged them. The Regent would begin the campaign of conquest of the Robotech Masters empire in the Local Group, with more worlds being gradually conquered. Zor would be killed in an Invid assault, and the Protoculture Matrix would be lost on board the SDF-1 that was sent to a far off world. Eventually, the Regent began his campaign against Tirol which the Robotech Masters had now abandoned in order to retrieve Zor's Battle-fortress. By this point, the Regess had grown increasingly disgusted with her husband, the Regent, who had become fixated on conquest and war whereas she desired to evolve into a more enlightened being. (COMIC: Legend of Zor)

As such, she looked at him scornfully when he initiated the assault on Tirol as a wasted effort. (Robotech II: The Sentinels) Instead, she traveled to Praxis to begin her Genesis Pit experiments where she studied the Praxians to find a more evolved form for her race. These experiments critically damaged the environment of Praxis, leading to its destruction. At this time, Humans of the Robotech Expeditionary Force had arrived on Tirol and waged a campaign of liberation alongside their Sentinels allies. The Regess later departed for Haydon IV to find the location of the Protoculture Matrix where she was assisted by Vowad and interfaced with the Awareness. Her experience led her to learn that the mysterious Haydon had influenced the worlds of the Local Group and that a digital version of Zor was recorded who warned the Regess that only madness awaited her if she dwelled further on the matter. She eventually met with Haydon himself in the Awareness who told her to find the Protoculture Matrix as part of some prophesized event.

In the aftermath, the Regess remained on the Haydonite homeworld until the Regent sent her a gift; a Tirolian called Rem who was an ally of the REF. This individual resembled Zor and was intended as an insult. However, Rem was, in fact, a clone of Zor and the Regess decided to probe his mind. Her findings led her to take half her race and depart from the known worlds which left the Regent in his continued war against the REF as well as the Sentinels. Eventually, the Regent perished in the struggle which left the Regess as the only ruler of the Invid race.

The blooming of the Flower of Life on Earth was detected by the Invid Sensor Nebula and the Regess took her entire race to the planet where she easily conquered the weakened Human defenders. This chain of events instigated the Third Robotech War where the Regess created Reflex Point as her primary hive whilst her children harvested the planet of the Flower of Life. Despite defeating the United Earth Government, bands of resistance forces still existed around the Earth, though initially, these did not trouble her forces to any great degree. Furthermore, the Earth Reclamation Force was constantly defeated by the sheer ruthlessness of the Invid that now defended the planet. During this time, the Regess conducted her experiments in evolution through the use of the Genesis Pit in order to find a more enlightened form for her race. This led her to determine that the Human form was, in fact, the most ideal for this task and she began transforming some of her children into his evolved body. Among the first included the Princesses Ariel and Sera, along with the Prince Corg.

Eventually, events culminated in the Battle for Reflex Point, where the Human resistance fighters gathered for a final assault in conjunction with the Earth Reclamation Force. Ariel attempted to appeal to her mother to end the bloodshed by leaving the planet. Initially, the Regess refused as Earth was the only known source for Protoculture and the Flower of Life. However, upon seeing Shadow technology amongst the Human forces, she concluded that her enemy had allied with the Children of the Shadow. In addition, she believed that the Earth had fallen under the malignant spirit of the Robotech Masters, with bloodshed bringing only more bloodshed.

Thus, she decided to consume all the Protoculture on the planet and head for a new world that was calling to her. The Regess at first asked her daughter Ariel to accompany her, but she was refused. The Regess warned Ariel that her fate would be forever tied to the Humans when the Children of the Shadow fell on them. Afterward, she transformed herself and her children into energy that destroyed the Neutron-S missiles headed for Earth, and departed for parts unknown. 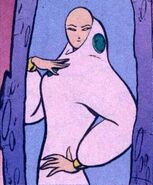 The Regess was infatuated with Zor

The Invid Regiss at Haydon IV 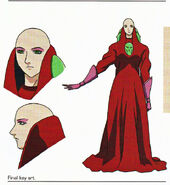 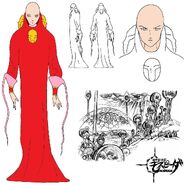 Add a photo to this gallery

Retrieved from "https://robotech.fandom.com/wiki/Regess?oldid=52983"
Community content is available under CC-BY-SA unless otherwise noted.