The SDF-3's construction began in 2012 after the destruction of the SDF-1 and SDF-2 during Khyron's suicide run on New Macross City. (Macross Saga: To the Stars)

Although built for the mission to Tirol, the SDF-3 was used before the said mission, in 2021. In an incomplete fashion, it was a center point in the first battle of the Crystal War, where non-culture-affected Zentradi began attacking the ship. Kyle Bartley and Max Sterling helped fight off the army, although that was only the start of the war. (Crystal Dreams 1: Crystal Dreams)

The War ended a year later in the defeat of the Hostile Zentraedi, the population of Earth became paranoid and the preparations of the Pioneer Expedition were put in motion.

The SDF-3 Pioneer originally launched in the year of 2022 to search for the homeworld of the Robotech Masters. (Robotech II: The Sentinels)

After they arrived at the Tirol, they were attacked by the Invid Regent and the SDF-3 was heavily damaged at the point that the REF was stranded 21 years in the Local Group of Fantoma.

In 2042, the SDF-3 was heavily damaged during T. R. Edwards' rebellion against the REF. The bridge of the vessel was damaged by Shadow fighters while the ship's reflex cannons were destroyed by the Invid Regent's Carrier. Several of the crew were injured, including the ship's commanding officer, Lisa Hunter.

Over the next year, the SDF-3 was refitted over Tirol with its destroyed reflex cannons replaced by twin synchro cannons. (Robotech: Prelude to the Shadow Chronicles comic: "The Enemy Within")

The refit SDF-3's first action was over the Invid homeworld of Optera where the ship destroyed a Genesis pit mutated Edwards with a bombardment from its synchro cannons. (Robotech: Prelude to the Shadow Chronicles comic: "The Children of the Shadows")

The SDF-3 and the science vessel Deukalion traveled to the Omicron Sector to test-fire a Neutron-S missile. During the test, the missile created a Black hole, crippling the Deukalion and damaging the SDF-3.

Both vessels were aided by the Icarus, which was sent to check on the SDF-3 after contact was lost with the vessel. Due to the loss of the SDF-3's fold drive the Icarus planned to jump to hyperspace close to the SDF-3, engulfing it in its hyperspace bubble. However, the SDF-3 was rammed by an Haydonite warship, preventing it from jumping with the Icarus and sending it back towards the black hole.

The status of the SDF-3 was unknown, though the Haydonites believed that it had managed to escape the black hole and expected it to have retreated back to Space Station Liberty. They were surprised to not find it there when they launched their attack on the station.

Following the battle Captain Vince Grant was given the mission to take the Ark Angel and search for the missing vessel.

The "incomplete SDF-3" design for the unreleased Robotech: Crystal Dreams

A publicity image for Robotech: Crystal Dreams, showing the SDF-3 in front of Earth 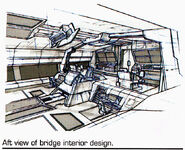