Space Fold Technology was a propulsion system that enabled faster than light travel. The system folded the fabric of space-time, thereby allowing a spacecraft to instantaneously travel via artificial micro-wormhole between two distant points in space.

The crew of the SDF-1, which was rebuilt by the United Earth Government, was forced to conduct a space fold to escape the attacking Zentraedi invaders during the initial battle of the First Robotech War. The fold was conducted 2000 feet above Macross Island and was intended transport the starship to the far side of The Moon. Such a low altitude space fold shocked Commander Breetai and was deemed impossible by Exedore, but was nevertheless accomplished by the Humans. (Macross Saga: Space Fold)

In 2010, millions of Zentraedi ships folded all around Earth. When they were in position, they opened fire and nearly completely destroyed the Earth. (Macross Saga: Force of Arms)

Later, the end of the First Robotech War, the newly built SDF-3 used a fold system to depart Earth. After an Invid attack, the fold generators were destroyed. (Robotech II: The Sentinels: Departure)

According to one source, in the first battle of the Second Robotech War, the Southern Cross were losing and outnumbered. Their computer was jammed, and they could not leave their current position for over 15 minutes. Their only hope was to do a hyper-space fold. They were successful in activating the fold, which also wiped out a large number of the enemy. (Robotech: The Movie) 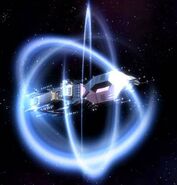 The Icarus' drive
Add a photo to this gallery
Retrieved from "https://robotech.fandom.com/wiki/Space_Fold?oldid=54206"
Community content is available under CC-BY-SA unless otherwise noted.