Tirolian Corvettes were heavily armed and armored craft used by the military forces of the Robotech Masters. They functioned as troop carriers where they were able to deploy either clone troops into the battlefield or even mecha such as Bioroids. Furthermore, their array of weapons allowed them to function as support craft. At least 200 such craft were stationed onboard Tirolian Motherships.

After the loss of the SDF-1 and the defeat of the Zentraedi, the Robotech Masters took their clone populace in order to retrieve the Protoculture Matrix personally. Thus, they left their homeworld of Tirol defenseless and it eventually came under attack from the forces of the Regent. His forces managed to effortlessly defeat the Tiresian defenders and occupy the planet with Inorganics left behind to enforce the Invid rule. By this point, at least one troop carrier Corvette had crash-landed on the surface. Cabell and his apprentice Rem sought to capture one of the Inorganic Cougars only for the machine to spring free whereupon it chased after the elderly Tirolian. Cabell managed to hide within the cockpit of the crashed troop carrier but its canopy was ultimately shattered by the Cougar. However, Rem saved his mentor by using a dead Invid Shocktroopers mecha to damage the Inorganic which allowed the pair to escape.

When they entered the Earth solar system, their forces engaged that of the United Earth Government leading to the Second Robotech War. In this time, Tirolian Corvettes played a critical role in the Robotech Masters in fighting the Human defenders. During the initial approach on Earth, three such Corvettes were deployed from orbit to the surface where they narrowly avoided Human missiles. They would later be used to deploy Bioroids that engaged the Human mecha of the Army of the Southern Cross. It was the 15th Alpha Tactical Armored Corps who discovered that damage to the Corvettes led to the Bioroids retreating to their craft which occurred during the skirmishes between the two sides. When the Robotech Masters flagship crashed on Earth, Corvettes were deployed to abduct Humans in order to brainwash them to serve as soldiers in the Tirolian army to bolster their forces.

Later, in space, the United Earth Forces engaged the enemy once more and Lieutenant Marie Crystal managed to board a Corvette using her Ajax. During this time, she learned that the Tirolians operated in a Triumvirate of three clones. One such Corvette was used by Karno to inspect SX Point 83 where they discovered Zor Prime's presence at the site who told them to deliver a message to the Masters. Another Corvette was used to transport the 15th Squadron along with Zor Prime during hostage negotiations on the Tirolian flagship.

At the climax of the Second Robotech War, Corvettes were used as troop transports to deploy legions of clones in a final assault against the Humans. They were also used with devastating effectiveness against the Earth forces with one such craft being responsible for destroying the Human headquarters at Monument City. The 15th used Corvette troop carriers to later ferry away from the civilian clone populace of the Mothership before it was destroyed.

These crafts are not named on the show though they are referred to as troop carriers in one episode. However, the Infopedia mentions that Tirolian Motherships carry 200 Corvettes which are, presumably, these vessels.

The earlier Robotech: The Roleplaying Game Book Four: Southern Cross sourcebook refers to these craft as Robotech Assault Carriers/Vessels (pg 101). The more recent Robotech: The Masters Saga Sourcebook refers to these craft as "Roil-Tiluvo" class Tirolian Assault Dropships (pg 254). The later sourcebook states these vessels are a class of Tirolian corvette design with this model carrying between 30-40 Bioroids.

A fleet of Tirolian Corvettes 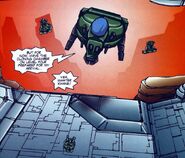 Cabell finds a Tirolian Corvette during the Invid invasion.
Add a photo to this gallery

Retrieved from "https://robotech.fandom.com/wiki/Tirolian_Corvette?oldid=51099"
Community content is available under CC-BY-SA unless otherwise noted.