1 GU-11 gun pod
Head lasers (no. depending on model)
2 lasers in nose (SDF-1 upgrade only)
4 wing hardpoints
The VF-1 Valkyrie series were the first Human designed and built series of Veritech fighter. Each Valkyrie had three modes, Battloid, Guardian and Fighter, and were the most versatile mecha used by humanity during the First Robotech War. The Valkyries were built using the knowledge gleaned of robotechnology thanks to the arrival of the SDF-1 on Earth.

Following an attack on the prototype by Anti-Unification League fighters that saw Fokker crash the prototype, it was briefly shelved for the Project Excalibur. (Comic: "Robotech: From the Stars 5: The Gathering Storm") The project was restarted after Fokker successful used the prototype to kill the hijackers of Armor-1 and destroy a reflex missile that was launched at Macross Island. [2]

The United Earth military was able to keep the Valkyrie's transformable capability a secret, even from the civilian inhabitants of Macross Island were a large number of Valkyries were based, until 2009 when the Zentraedi attacked Earth and multiple Valkyrie squadrons were deployed to fight off the invaders. [3][citation needed]

By 2015, a replacement for the Valkyrie was been sought. [4][citation needed]

The VF-1A Valkyrie was the standard model of Valkyrie assigned to new recruits used by the Robotech Defense Force during the First Robotech War and came in a light brown colour scheme. Young ace pilots were in VF-1As had a mostly-white colour scheme. In 2014, the VF-1R model started to replace the VF-1A. (Robotech Infopedia)

The VF-1D Valkyrie (also known as the VT-1D) is a trainer model of the VF-1 series whose cockpit was designed to accommodate two individuals. (Robotech Infopedia)

The VF-1J Valkyrie was a model of the Valkyrie usually assigned to leaders of 3 man groups or Squadrons. It was identified by its unique head which features two light lasers.

Rick Hunter piloted this model with an almost white paint job when he led the Vermillion Squadron. That Veritech was destroyed during a Daedalus Maneuver that took place on Earth.

After 2014, production of the VF-1J was discontinued and the surviving fighters were upgraded to VF-1R standard. (Robotech Infopedia)

The VF-1R Valkyrie was designed as a stop-gap fighter to bridge the gap while the next-generation Advanced Veritech Fighter was in development. The older VF-1A and VF-1J models were gradually replaced by the VF-1R, which offered better survivability.

The VF-1R featured three cannons mounted on the head of the Veritech. Two of the cannons are like those on the the VF-1J models. The third cannon is a pulse autocannon operated independently of the pilot and was used for point defense to shoot down incoming missiles and other ordinance, allowing the pilot to concentrate on other tasks. [5]

The VF-1S Valkyrie was one of the rarest models of the VF-1. The model was specifically designed for commanding officers of Veritech squadrons. Only a dozen had been built when the First Robotech War began. [6]

The most famous VF-1S was the prototype, the VF-X-1, otherwise known as Skull-One. Skull-One survived the entire First Robotech War and was piloted by two of the most celebrated pilots of that conflict, Roy Fokker and Rick Hunter. It was eventually dismantled in 2015. (Comic: "Robotech: From the Stars 0: Promises")

The VEF-1 was a version with an attached radome, used for electronic warfare and AWACS duties. It did not carry the gun pod.

Super Valkyrie had the MVAS-1 FASTpack armor and booster attachments. It added a number of mini-missiles to the Veritech's armaments and was mainly used in spaceborne operations.

The Armored Valkyrie had the GPB-1S armor system. It was limited to battloid mode. Rick Hunter once piloted his VF-1J with the armor to investigate a Cyclops recon vessel, although he jettisoned the armor.

The Jotun Armored Valkyrie featured the experimental JBP-2R Modular Armor. Jotuns saw action during the Rain of Death and the Battle of New Macross City.

The armored MVAS-3 FASTPack Seamaster Valkyrie was a stopgap armor system to allow the fighter to operate under water while dedicated platforms were under development.

A VF-1 in Fighter mode

Skull Squadron during the battle of Saturn

A VF-1J during the Battle of Macross Island

An SDF-1 squadron right before its destruction 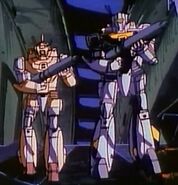 Skull One and a VF-1A

Skull One preparing for takeoff