The VFH-10 Armored Gyro Assault Chopper (VFH-10 AGAC), also known as the AJAX, was the last series of Veritechs that was developed by Earth Forces until the Cyclone.

Amongst the space forces, the fighter and Battloid modes were used whilst the ground forces made use of the helicopter mode along with Battloid mode. A majority of Ajax's were assigned to the space forces in order to replace the lost units. They were rarely used as a high performance fighter as this was not their function though in space their many engines provided them not only good acceleration but superb control. The multiple beam cannons were capable of being used without any loss in effective range. An AGAC's helicopter (or ☀ Gyrodyne ) mode allowed it to hover behind cover more effectively than the earlier generations of Veritechs due to it holding a smaller profile than Guardian modes of such mechas. The beam cannons functioned well at medium range and its missiles were highly effective against both space based or ground based targets.

These Veritechs had a less extensive transformation sequence compared to conventional Veritech fighters allowing the design to be kept relatively small and simple. All its weapons were mounted in gun or missile pods making it easy to switch and maintain. Ajax's proved to be a highly successful design though it suffered grievous losses against the Robotech Masters.

While the main production of the fighters did not go into effect until 2030, they had been used before that point.

At last one of these fighters was on-board the SDF-3 during the Pioneer Expedition to Tirol. It was among the fighters shown off to The Sentinels brought onto the ship in 2023. (Robotech II: The Sentinels: The Invid Must Die!) 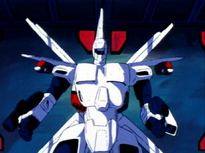 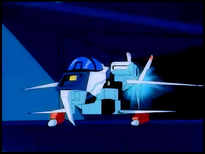 Episode 51 Clone Chamber AGACS launch at the hangar of Tristar class vessel .
Add a photo to this gallery

Retrieved from "https://robotech.fandom.com/wiki/VFH-10_Armored_Gyro_Assault_Chopper?oldid=51174"
Community content is available under CC-BY-SA unless otherwise noted.