Zor was a Tirolian scientist most notable for his discovery of the Flower of Life use as the energy source known as Protoculture.

According to one source, Zor was the son of Senator Zol of the Tirolian Republic and was a citizen of Tiresia where he served as a scientist with his mentor being Cabell. He also fell in love with a female Tirolian by the name of Arla with the two being lovers. During this time, his world had become increasingly dependent on the planets of the Local Group and were facing energy shortages. In this time, Zor was working on finding an alternative source of energy and conducted experiments on finding a biological means of creating such power. He was also a proponent of the Tirolian space program which was facing problems and threatened with being discontinued. Ultimately, Zol managed to convince the Tirolian Senate to continue the program and his son was considered one of the applicants for space flight alongside his friend Vard. (Robotech Genesis: The Thirsting)

After venturing into space onboard the Aztraph, the Tirolian expedition force traveled the nearby worlds for sources of energy. Their travels led them to the Tzuptum system where they discovered the planet Optera. After journeying to the surface, Zor made contact with the primitive Invid and uncovered the Flower of Life. At night time, the expedition went to sleep but Zor was compelled by a psychic voice into the surface where he made contact with the guiding intelligence of the Invid; the Regess who took on a Tirolian female based form that was pleasing to his eyes. They later engaged in a telepathic communion where he shared all aspects of his society with her and she shared with him her knowledge of the Flower of Life. The next morning, he would be awakened by his colleagues and take samples of the Flower of Life with him back to Tirol. (Robotech Genesis: The Changing)

When he returned to his homeworld, Zor was shocked to learn that his society had greatly changed with Senator Nimuul holding great influence in the Senate. He would be escorted to meet with Nimuul where he was forced to show his findings to the Tirolian Senate that led to the development of Protoculture by using the Flower of Life. His experiments led him to create Robotechnology that became the guiding science of the Tirolian Republic and instigated ambitions within the corrupt Tirolian leaders. Cloning would be used to create a perfect society and Nimuul would use this to create an army to take over the Republic where he formed the Tirolian Empire to replace it. With his father taken hostage, Zor had no choice but to follow the commands of the newly formed Robotech Masters. He created genetically engineered pollinators to encourage the growth of the Flower of Life as they were outside their native environment with these experiments being adapted to create the Zentraedi who were used initially to mine Fantoma of its mineral wealth. (Robotech Genesis: The Harvesting)

Civil unrest followed from the underground and his lover Arla attempted to recruit Zor but he refused in fear for the life of his father. Thus, Zor witnessed the transformation of the Zentraedi from miners into warriors for the Robotech Masters when the underground attempted to liberate Zol. To enhance their power, the Masters ordered Zor to defoliate Optera of all its Flower of Life and he led the Zentraedi harvesters as they ransacked the planet. It was only the telepathic outrage of the Regess who felt betrayed by Zor did he leave the dying world with only a small percentage of the plant. When he returned, he learned his father had died and Zor became finally determined in ending the evil that he had unleashed. Siding with Arla, the pair moved the Protoculture Matrix under false orders to the SDF-1 that had been assigned to Zor to find new worlds to plunder. But before he could depart, Vard confronted the pair and killed Arla. In a rage, Zor turned his weapon on his former friend and killed him before venturing to the SDF-1 where he went with his Zentraedi crew on false orders.

During his travels, Zor went to the many worlds of the Local Group such as Karbarra, Garuda, Spheris, Peryton, Praxis and Haydon IV where he seeded them with mutated versions of the Flower of Life. On one such planet containing an outpost, Zor traveled to the surface when the installation came under attack from the Invid. In the struggle, Breetai was wounded and Zor was killed but not before sending the SDF-1 on a course away from the Masters to deprive them of the Protoculture Matrix. (Robotech Genesis: Legend of Zor: The Avenging, Robotech: The Graphic Novel)

His dead body was later returned to Tirol where the Robotech Masters scanned Zor's brain for any clue where he might have sent his Battlefortress. This when Cabell took a tissue sample to create a clone of him called Rem whilst the Masters formed Zor Prime in order to reclaim the secrets of Robotechnology. (Robotech: The Graphic Novel)

NOTE: Zor was the central figure of the entire Robotech series. He was the original Robotech Master, due to his discovery of Protoculture, a powerful bio-energy source that was the basis of Robotechnology. He heralded a technological renaissance in his society, but circumstances led it to fall into corruption and decay. He rebelled against his fellow Masters and prior to his death, sent his Battlefotress, containing the last known Protoculture Factory Matrix, away to a presumed safe location. The Robotech Masters, desperate to unlock his knowledge on protoculture, cloned Zor in hopes of reviving his memories. The first of these clones was Zor Prime. He was originally based on Seifrietti Weisse and his name derived from the alien race Zor in Super Dimension Cavalry Southern Cross, the series which was adapted into the second "saga" of Robotech.

Zor was originally responsible for discovering the Invid Flower of Life many eons ago. His studies of the miraculous plant led him to cultivate a powerful new energy source known as Protoculture. This led to the creation of a new science known as Robotech, with Zor being known as the first Robotech Master. As the Robotech Empire grew, Zor's fellow Masters grew agitated. They began proto-genetically engineering an army of giant humanoids that would serve as an intergalactic police force. Due to incorrect programming, the giants rebelled and began fighting against each other. The Protogen War, as it was known, broke out, leading to the collapse of the great Robotech Empire.

After the war, the Tirolian society had become a shadow of its former self. Its leaders became obsessed with the triplicate nature of the Flower of Life. Zor rebelled against his fellow Masters, stating that they had abused his creation and brought untold suffering to his people. Zor, in his final act, hid the last known Protoculture Matrix aboard his Battlefortress and sent it away to a supposedly hidden location.

In their desperation to recover their lost power source, the Robotech Masters dispatched their proto-genetically engineered warrior race of giants, now known as the Zentraedi, to seek out the lost battlefortress. Little did they know that they would find it on Earth, now converted into the Super Dimension Fortress-1 Macross (SDF-1), thus setting the stage for the First Robotech War. By the end of the conflict, the entire Imperial Grand Fleet of Dolza was destroyed by the inhabitants of Earth. This necessitated the Robotech Masters taking more direct action, cloning Zor in hopes of recovering his memory. 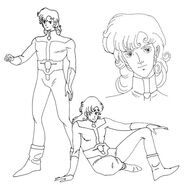 The original Southern Cross model sheet for Seifreit Weisse, whose appearance became the basis for Zor. 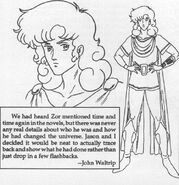 Concept art for the original Zor, the founder of Robotechnology, for the comic series Robotech Genesis: The Legend of Zor.

Concept art for an aged Zor to be used in the show Robotech: Academy if the show is produced. Zor has likely been aged in recent concepts to put to rest the contradiction that the Zentraedi race are said to be thousands of years old, while their creator died young in a year close to 1999.
Community content is available under CC-BY-SA unless otherwise noted.